The coalition agreement between Germany’s Social Democrats (SPD) and Christian Democrats will be put to a vote by all SPD members. Many in the SPD argue against entering government because they fear that this would further erode voter support for the SPD. Yet Social Democratic parties across Europe, irrespective of whether they are in government are losing voters. This is a secular trend caused by voter disillusion. It is leading to the rise of nativist parties, which could lead to violent conflicts. However, this could be avoided if nativist and social democratic parties will govern together.

In Germany, the coalition agreement between chancellor Angela Merkel of the Christian Democrats (CDU-CSU) and the leadership of the Social Democrats (SPD) has to be presented for a vote to all 450.000 SPD members. The results will be known on 4 March, on the same day when Italy’s parliamentary elections will be held. A lot of hand-wringing will take place in Europe on that day!  If no coalition comes about, Merkel will probably form a minority government, a first for post-war Germany.

The outcome of the SPD vote is totally open as no opinion polls are available. A vocal faction of the party around Kevin Kühnert, the leader of the Jusos, the SPD’s youth organisation, is opposing the agreement. It argues that the SPD’s loss of voter support from a peak of 45.8% in 1972 to a mere 20.5% in the 2017 elections is caused by its participation in coalition governments led by Merkel during 2005 to 2009 and again since 2013.

There is some truth in this. Voter support for the SPD recovered a bit after it left its first coalition with Merkel in 2009 and fell to a new low after it re-entered government in 2013. Moreover, the SPD’s last big surge in votes occurred in 1998, after a 13-year period of opposition against the various governments led by Helmut Kohl (see chart). Having this pattern in mind, it is entirely possible that SPD members will reject the coalition agreement.

Yet, as a comparison of voting trends among the Social Democratic parties of Germany, France, Spain and Austria shows, support for these parties is declining no matter whether they are in government or not (see chart below). For example, the decline in support for Austria’s SPÖ is similar to that of the SPD, even though the SPÖ was represented in government for 40 years since 1970, as compared to only 27 years for the SPD. 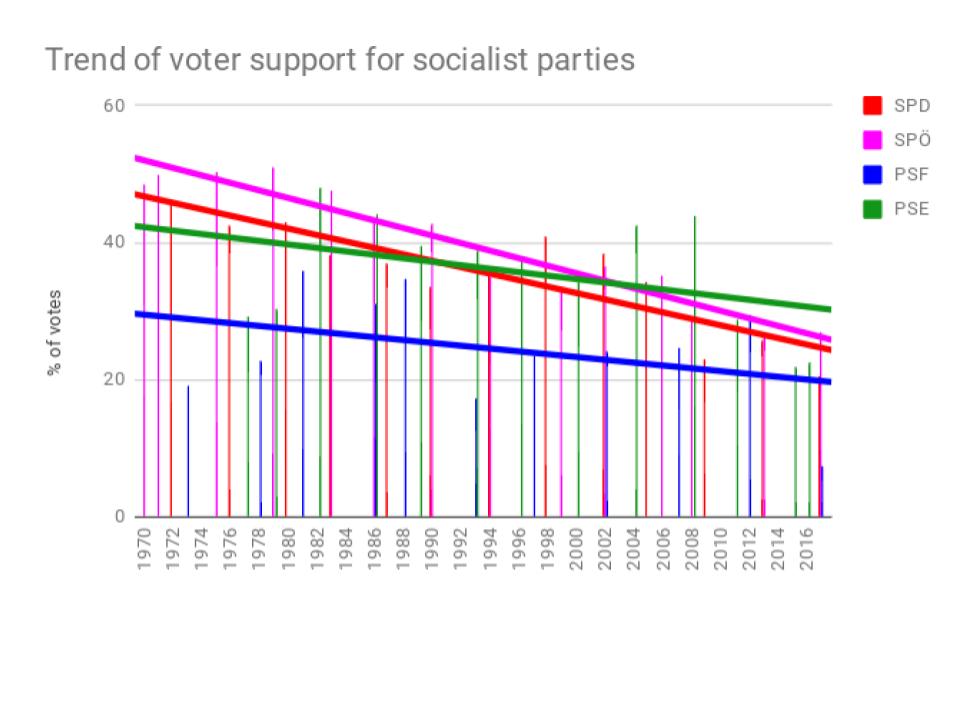 On the other hand, the loss in voter support for the socialist parties of both France (PSF) and Spain (PSE) is much smaller than in the case of the SPD, even though they spent a similar amount of time in power (see chart and table).

It seems, therefore, that a more accurate explanation of the changes in voter support for social-democratic parties since 1970 is that parties which had a high share of votes to begin with, like Germany’s SPD and Austria’s SPÖ, lost proportionally more votes than the parties with a smaller share in votes, as France’s PSF and Spain’ PSE. As a result, their share of votes has today become quite similar (see chart above).

If it is not the duration of time spent in office, what then is driving the relentless decline of Europe’s socialist parties?

Our answer does not bode too well for the parties concerned. We believe that the latter are in a secular decline, which in turn is caused by a fundamental change in attitudes of their electorate. The typical voter for Europe’s socialist parties used to be the working class and those other strata of the population which were underprivileged but shared the belief that, with support from the socialist parties, they could improve their income and social standing.

This belief has largely dissipated today and with it voter support for socialist parties. Instead of expecting, as in the past, a better future, these parties’ traditional voters today fear to slide down the social ladder. Moreover, they do not believe that socialist parties can protect them from such a decline. Voter anxiety is caused by stagnating real incomes, rising income inequality and by fears that these trends will accelerate.

Even with rising incomes and falling income inequality, people can become dissatisfied, as the example of former East Germany shows. East German incomes have risen markedly since unification. In Saxony, for instance, per capita incomes increased from only 59% of the German average in 1991 to 87% of the average in 2015. Yet Saxony was the region with the highest share of votes, 27%, going to the right-wing Alternative für Deutschland (AfD) party. The CDU-CSU got 26.9% of the vote in Saxony and the left-wing Die Linke party 16.1%. Only then came the SPD with 10.5%.

Interviews conducted with voters in Eastern Germany after the election made it clear that people resented being treated as second-rate citizens by their compatriots in the West. As for the narrowing of the income gap between East and West, it has been brought about mainly by transfers and subsidies from West Germany, which, paradoxically, are one reason why West Germans show a condescending attitude towards East Germans.

The Rise of Nativism

What is happening in East Germany is playing out in Europe at large. People who feel disadvantaged and shortchanged are turning away from centrist parties towards radical parties. Center-left, social democratic parties are suffering more in this process than center-right, Christian Democratic parties because they have been the traditional home of voters who aspired to improve their social position and are now feeling disillusioned. And parties of the extreme right are profiting more from this disillusionment than parties of the extreme left.

As a consequence, more and more government coalitions in Europe are likely to follow the recent Austrian pattern, where ÖVP, the country’s weakened but still dominant center-right party has formed a coalition with FPÖ, the party of the extreme right. But this holds for the medium term only; in the longer term, we expect more coalitions between parties of the center-left and those of the extreme right, as will be argued below.

The anger of Europe’s voters is not new; it has developed over the last 30 years, in line with the turn towards neo-liberal policies in the West and the acceleration of technological change and of globalisation. This is why it is of secondary importance whether socialist parties are in power prior to an election. For their disillusioned former voters, it suffices that they have been in power at all to become perceived as part of a system which is rigged against them.

The fact that most disillusioned voters are turning to parties of the extreme right and not to those of the extreme left merits some thought. It suggests that many have given up hope that an alternative economic system different from capitalism would represent a solution. This is understandable, given that the current generation witnessed both the collapse of the Soviet Union and China’s turn towards capitalism.

Instead, people are now putting their hopes in nativist ideologies. If capitalism is reneging on its promise of a better future, than at least nativism will provide them with a degree of self-respect and feeling of belonging, seems to be the expectation. Nativist politician can deliver on this, no problem. The question is whether their nationalist, anti-immigrant and reactionary cultural policies will provide sufficient compensation in the long run for a social and economic position which is perceived by their voters as offering little perspective for improvement. There is a danger that ever-increasing doses of nativist policies will be needed to keep these voters happy. This, in turn, raises the danger of violent conflicts, both within societies and between countries.

But an alternative case can be made as well. Maybe the high degree of dissatisfaction which can be observed at present in the West is a sign of a transitional period which will usher in a new equilibrium. With time, people’s anger may subside, and they may accept the fact that there are other classes in society which are richer and more powerful than them. A precondition for such an acceptance is a continuous increase in material well-being for everyone and attractive offerings of entertainment – panem et circenses, the bread and circus games of old Rome. An additional condition is that a credible avenue must be kept open for the talented and hard-working to improve their economic and social position.

Paradoxically, these are classic examples of social democratic policy demands: increases in real incomes, shorter working hours and equal access to education. This implies that the most useful coalitions of the future to prevent a dangerous escalation of nativist policies will be those between social democratic and nativist parties. The social democratic coalition partner will be responsible for the material well-being of voters and the nativist one for their emotional gratification.

This offers some consolation for Europe’s social democratic parties: the future holds a role for them. But they should learn to accept the fact that it will be more modest than the one to which they have become accustomed.

As this will take a long time to settle in, my guess is that SPD members will reject the coalition agreement.

I am an economist by education. I worked at the Vienna Institute for International Studies and at Nomura, the Japanese in vestment bank. Thereafter I co-founded and ran Akakiko, Austria's largest Japanese restaurant chain. The last years I spent in Bulgaria, running Eatglobe, a website on food and the climate and Yarduna, a website on art and fashion. I am currently back in Vienna for some time View all posts by amostoday