Summary: I have a dream in which there is peace between Israel and Palestine. It all started with a Industrial Zone initiated by China in the North of the Sinai peninsula which turned Gaza, and with it the whole Palestinian economy, into a new Singapore.

Like the great Martin Luther King, I have a dream.

In this dream, there is peace between Israelis and Palestinians.

The heart of the Palestinian economy has moved from the West Bank to Gaza and its new Logistics and Industrial Zone, simply called the Zone, which it is leasing from Egypt. Gaza itself has become a service economy, specialising on education, commerce and finance. Larger Gaza, including the Zone, as everyone calls it, has become an economic powerhouse, with a per capita GDP of USD 50,000 – as high as Tel-Aviv up the coast to its North.

Five million people are living in Larger Gaza, most of them in Gaza city, which has grown into a congruous urban area covering the whole of the former Gaza strip, and four million in the West Bank, which is colloquially just called the Bank. This is a reversal of the relationship between the two regions prevailing at the turn of the century, when the population of Gaza was 1.9 million and that of the Bank 2.7 million. The strong increase in Palestine’s total population 4.6 from to 9 million people came about because a large part of Palestinians living abroad, such as in Saudi Arabia, the Gulf states and even the US and Israel, chose to settle in Gaza and the Bank.

For, despite the economic power of Gaza, incomes in the Bank are only about 20% lower, partly to the fact that a part of its workforce is commuting daily to Gaza, via a corridor crossing Israel and accommodating a highway and a high-speed rail. A train ride from Jerusalem to Gaza City takes only 30 minutes. A large part of commuters are “expatriates”, who have left Gaza due to its sky-high house prices. Most of them prefer to live in the Hebron area in the Southwest which is both less expensive than Gaza city and more comfortable, due to its higher elevation and beautiful surroundings. For them, the commute is ten minutes shorter.

The commuters are the cause of a perennial dispute between the administration of Gaza and that of the Bank.  Gaza officials complain that they are losing tax revenues to the Bank due to the commuters. Their counterparts reply that they need those revenues to provide the commuters with adequate infrastructure. But in the end, the Gaza and Bank guys always find a compromise.

The economy of the Bank is benefiting in yet other ways from the boom in Gaza. It is specialising on health care, recreation and tourism, sectors which are catering partly to Gaza consumers. As in Gaza, education is an important economic factor. For example, many students of the Arab University of Jerusalem are coming from abroad, including from Israel. Agriculture and small-scale manufacturing are playing only a minor role in the Bank’s economy, with the exception of artisan goods which are in high demand by domestic and foreign tourists.

In addition, the return of Palestinians having lived abroad is creating a building boom in both Gaza and the Bank, where new cities are being built and existing ones expanded.

How did this remarkable reversal of fortunes come about?

It all started with the Chinese. Yes, really. 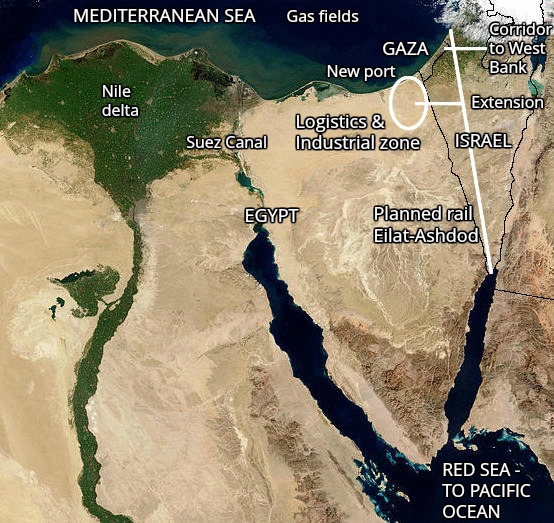 How it all started

The Chinese had initiated discussions with the Israeli government back at the turn of the century on an overland alternative to the Suez canal across Israel’s Negev desert. To do so, they proposed to connect the Israeli ports of Eilat and Ashdod via a high-speed, heavy-duty railway (see map above).

The idea fitted beautifully into China’s so-called Belt and Road initiative to build new trade routes to Europe.  But studies revealed the enormous costs involved. The Chinese almost abandoned the project when they had an idea: if the new rail line would have a branch leading to the Egypt’s Mediterranean coast in the North of the Sinai peninsula, a large logistics and industrial zone could be established there, which would justify the costs.

Energy-intensive industries could be operated in the Zone at lower cost than in China, as large fields of natural gas had been discovered in the Eastern Mediterranean. In addition to gas-based electricity production, the area’s record levels of sun radiation could be exploited to generate solar energy. Labour costs would also be lower, as would be the cost of transport to European markets.

The Chinese then proceeded with much wisdom. Chastened by criticism of their allegedly exploitative engagements in other countries, they decided to cooperate with the West. They approached the World Bank and a joint project was launched together with the Asian Infrastructure Development Bank – the Sinai being part of Asia.

The project’s design was a mixture of Chinese and Western approaches: the Chinese demanded a focus on developing infrastructure, such as a new port on the Mediterranean coast west of Gaza, as well as roads, railway lines, water and energy supplies and not least new schools to prepare and train the workforce. The West agreed, recognizing that the success stories of Singapore and Dubai had started with infrastructure investments, especially into new ports (see photos below for Singapore in 1900 at today, respectively).

Western thinking showed itself by the project’s emphasis on private investment, including into infrastructure, and by inviting participation by companies from around the world. In this way, public and multilateral funding of the first phase of the project could be limited to USD 30 billion.

Next came the task to ensure support by the major players in the region.

Egypt was highly interested, not only because it could sell its natural gas to the Zone but also because the project would create workplaces to the local population, including Bedouins, and thereby act against their radicalisation by Islamic extremists. Similarly, Egyptians were ready to opening the zone to workers from Gaza in exchange for Hamas, the ruling force in Gaza, stopping the supply of arms to Sinai-based extremists.

The United States put even more emphasis than Egypt on the Gaza aspect of the project. It insisted that the project be put under the sovereignty of Gaza in exchange for Hamas’ readiness to conclude a peace agreement with Israel. Hamas agreed under the condition that Israel ended its blockade of Gaza and that the Industrial Zone would be administered by Gaza. Egypt then consented to a long-term lease of the land. To bolster investor confidence, the World Bank obtained guarantees from all participants that the Zone would operate in a stable legal and regulatory framework. Israel agreed to end the blockade of Gaza, to allow the construction of a highway and rail corridor between Gaza and the West Bank and to the joint use of the Eilat-Ashdod rail link with the Zone, via a branch line leading to the latter.

The peace agreement between Hamas and Israel was concluded and the project started. It did not produce results overnight. But over the following decades, a similar process of development set in like the one which had led Singapore and Dubai to become highly developed economies. The new infrastructure attracted industrial and logistic companies from around the world. The unexpectedly strong growth of the African economy created a further incentive to invest in the Zone. After ten years a new airport was built on additional land leased by Egypt. It gradually expanded and ensured a chunk of the transit traffic between Europe, Africa and Asia.

The growing industrial, transport and logistic sector led to the emergence of financial, commercial and legal services, which were predominantly located in Gaza. Later on, as incomes started to rise, the other service sectors started to grow as well. As all these developments nurtured each other, the economy of Gaza and the Zone grew at annual rates of 7-10%. The strong economic growth in turn led to a de-radicalisation of Gaza politics. Hamas became a centrist party and accepted the emergence of competing parties. A functioning democracy evolved. Recognizing the realities created, the State of Palestine was turned into a federation consisting of Gaza and the Bank.

A few years later the Palestinian economy had become one of Israel’s main trading partners. Pressure to conclude an overall peace agreement, on top of the regional agreement concluded earlier between Hamas and Israel, increased on both sides. After lengthy negotiations, a compromise was reached: East Jerusalem and the Jewish settlements were returned to Palestinian sovereignty but the settlements’ Jewish inhabitants were allowed to stay and keep cultivating their lands, while paying a rent to the latter’s reinstated Arab owners. West Jerusalem became the internationally recognized capital of Israel and East Jerusalem the capital of Palestine, with the exception of the Jewish quarter in the old town, including the Western Wall, which was placed under Israeli sovereignty. Israeli citizens living in the Eastern part of the city could stay and a large part did. In exchange, citizens of Palestine were allowed to buy real estate in West Jerusalem.

The peace agreement with the Palestinians made it possible for Israel to make peace with most other countries of the region. Israeli military expenditures were consequently reduced and the tax burden lowered to stimulate the economy.

Gradually, the commitment of the Jewish settlers in the Bank to work their lands weakened as the prospect to see the land one day become part of Israel disappeared. More and more settlers ended their land leases and used the settlements for residential purposes only, taking up jobs in Israeli or Palestinian companies. Many sold their houses.

The growing interdependence of the Israeli and Palestinian economies led to calls for liberalising the mutual flow of goods, capital and people, following the example of the EU. As a consequence, trade between Israel and Palestine became fully free after some time, internal border controls disappeared and a customs union was proclaimed between the two countries. However, for both symbolic and economic policy reasons the two countries kept their respective currencies, the shekel and the dirham.

With Israel and Palestine already possessing a similar trade regime as itself, the EU initiated negotiations on admitting the two countries as EU members. The talks were concluded after only two years because of the EU’s strong interest in their success. By then, Israel and Palestine were universally regarded as beacons of prosperity and stability.

The Zone, where everything had started, meanwhile extended over a territory double its original size, an economic machine churning out goods for export to Europe, Africa and the Middle East.

I am an economist by education. I worked at the Vienna Institute for International Studies and at Nomura, the Japanese in vestment bank. Thereafter I co-founded and ran Akakiko, Austria's largest Japanese restaurant chain. The last years I spent in Bulgaria, running Eatglobe, a website on food and the climate and Yarduna, a website on art and fashion. I am currently back in Vienna for some time View all posts by amostoday